Space is a consideration for many people when they consider buying a piano. Many people now live in cramped apartments and small houses. Pianos are big, and it’s important that you do your research before buying one to make sure that you actually have the space for it.

When most manufacturers advertise their pianos, they focus on two specific dimensions. The height (if it’s an upright) and the length (if it’s a grand). But how wide is a piano? Fortunately, this is a really easy one to answer. Let’s go through this in a little more detail. 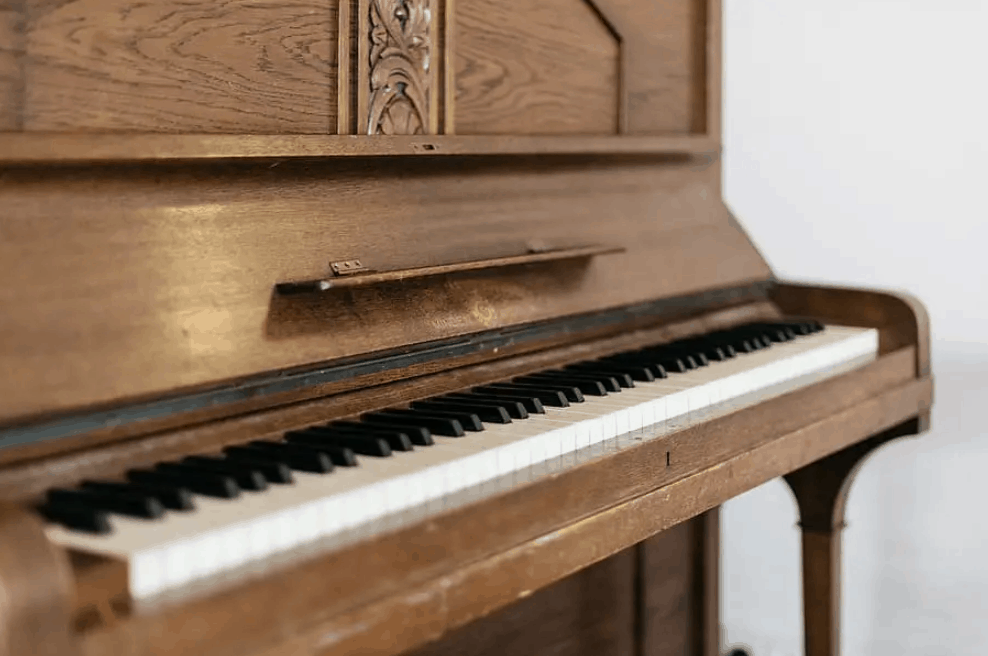 Contents show
How Wide Is a Piano?
Why Do Pianos Vary in Height and Length but Not in Width?
Why Are Digital Pianos Different?
Are There Acoustic Exceptions Too?
How Long Does It Take To Learn the Piano?
How Much Does It Cost to Move a Piano?
How Much Does a Steinway Grand Piano Cost?
How Do Online Piano Lessons Work?

How Wide Is a Piano?

While pianos vary quite considerably in height and length, pianos are roughly all the same width; 150cm, 59in or just under 5ft.

You’ll be pleased to know that whichever piano you choose to buy, it will be roughly the same width. This applies to grand pianos, upright pianos, and some digital pianos. There are certain digital pianos that it doesn’t apply to, which we’ll get onto later.

This information is useful because if you’re buying a new piano, for example. If you’ve had a piano in a particular space before, and want to replace it with a new one, you won’t need to worry about whether the space is wide enough. This applies whether you’ve got a digital upgrading to an upright, or if you have a grand and you’re downsizing to an upright.

In sum, as long as your space is at least 150cm wide, your piano will fit. There are a few rare exceptions, which we’ll discuss later in this article.

Why Do Pianos Vary in Height and Length but Not in Width?

With an upright piano, the keys are perpendicular to the soundboard and strings. A taller, bigger soundboard and longer strings make for a more resonant, fuller sound. This is why upright pianos vary in height so much. You can go right to the bottom end and find spinet pianos that are extremely short, as well as extremely tall professional upright pianos such as the Yamaha U3, which stands at an impressive 52in in height. 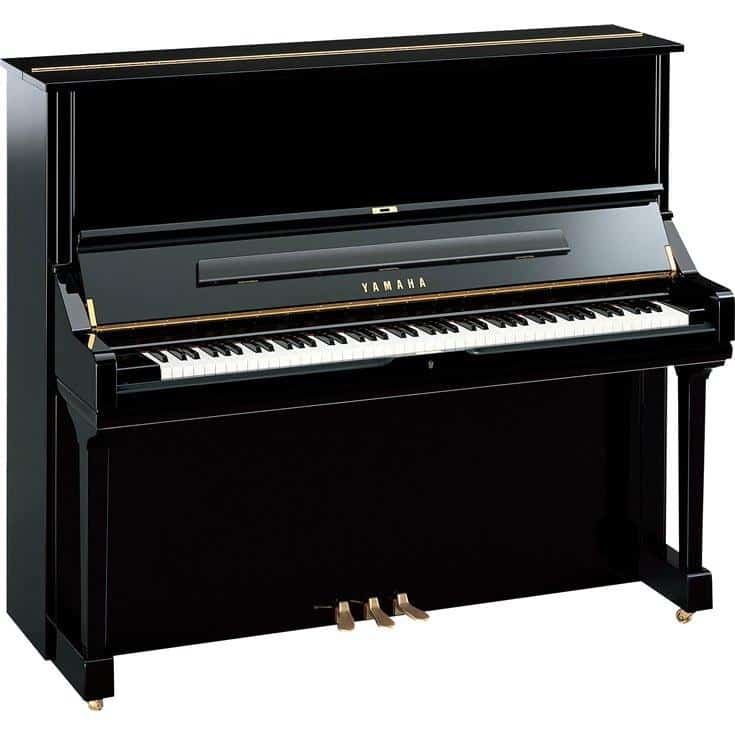 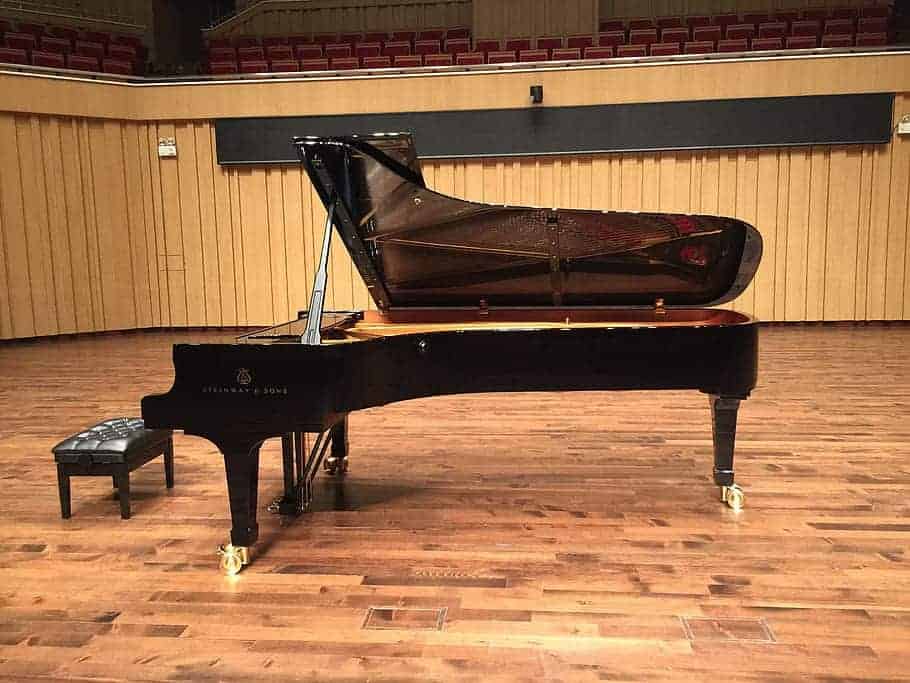 Again, the key takeaway here is that pianos vary in length/height for the same reason; larger pianos equal better sound.

The reason this doesn’t apply to width is that because to start with, it’s impossible to make a piano thinner, because it’s necessary to include 88 keys, which also have to be a certain size and width. Extending the width of a piano also makes no difference; widening the soundboard doesn’t have the same effect on the piano’s tone as lengthening it.

Widening a piano serves no practical purpose to improve the sound, other than using more materials, making pianos cost more and taking up more space. This is why pianos are all the same width.

You may find some variation; on some pianos the cheek blocks (the two blocks on either side of the keyboard that keep it in place) may be slightly wider or thinner, or there may be some variation in the thickness of the casework. As a general rule, however, my Yamaha U1 is roughly the same width as a 9ft Steinway.

Why Are Digital Pianos Different?

Now, console digital pianos generally follow the same rule as upright and grand pianos. If it’s got 88 keys, it’ll be roughly the same width as all other pianos that have 88 keys. The difference in digital pianos and keyboards is that not all of them have 88 keys. Some have 76 keys, some have 61 keys and some have even less. Naturally, with fewer keys, these pianos are going to be thinner than full size 88 key pianos.

There is another reason, however. Lots of digital piano manufacturers nowadays include plenty of bells and whistles, such as LCD screens and lots of buttons to control the multitude of features. These screens are typically placed to the left of the keyboard, along with the rest of the buttons and controls. This is why certain digital pianos with LCD screens, such as the Yamaha YDP-184, may be slightly wider than others that also have 88 keys but don’t have screens, such as the Yamaha YDP-164. 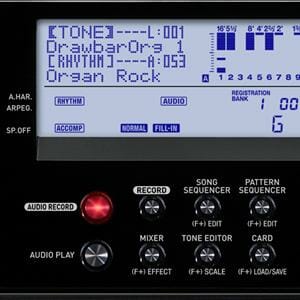 Additionally, the cheek blocks and casework tend to be thinner on digital pianos, as they tend to be made to a much lower cost than upright pianos. As a result, digital pianos tend to be slightly thinner; for example, the YDP-164 we spoke about earlier is 15cm thinner than a Yamaha U1.

Are There Acoustic Exceptions Too?

There are a few notable acoustic exceptions, including ones that you might actually come across.

Firstly, some pianos made before the 1940s or so have 85 keys instead of 88. I even owned a piano like this several years ago, and it was notable in that it was thinner than other, full size acoustic pianos. However, it’s unlikely that any of these pianos are going to be any less than 130cm in width.

The other notable exception is the Bosendorfer 290 Imperial. This piano is significant in that there are extra keys in the bass; it has 97 keys instead of 88. As a result, it’s a bit wider than most pianos, at 176cm. Nevertheless, it’s not significantly wider than an upright piano, only by around 25cm.

The Bosendorfer 290 Imperial also costs in excess of $250,000, so if you can afford one then you probably don’t have to worry about having the space to store it!

If you’re interested in some of my other informational articles about pianos, check out some of the following.

How Long Does It Take To Learn the Piano?

How Much Does It Cost to Move a Piano?

How Much Does a Steinway Grand Piano Cost?

How Do Online Piano Lessons Work?