Regular readers of this blog have often messaged me asking for my take on how hard a certain piece is, or what is the “hardest piano piece” ever? I don’t usually entertain these questions, because difficulty is one of the most subjective concepts when it comes to the piano. Just like interpretation, there is absolutely no one-size-fits-all approach; what is difficult for one is not necessarily difficult for another.

That being said, clear levels of difficulty exist; the “Scarbo” from Gaspard de la Nuit is very obviously more difficult than “Twinkle Twinkle Little Star.” However, when it comes to the standard concert repertoire, it’s very hard to quantify difficulty. Put simply, you will know when you’re ready to tackle a particular piece, and you’ll know when it’s too hard.

That being said, I think I’ve put together an interesting list here, and while not arranged in any particular order, these are my 7 most difficult piano pieces ever. Some of them are not strictly pieces, and are sets of pieces, but I didn’t want to select individual pieces from these selections because they are all so difficult. I know for a fact some of you are going to disagree with my selections below; this kind of thing is bound to invite disagreement! Let me know which ones you’d have gone for.

This set is a monster. It’s part of the standard repertoire but I can honestly say in my years of going to concerts, I’ve only ever seen any of these studies programmed once. That’s not to say that people don’t play them, but the challenge and pressure of having to play them live would without question be too much for me. Considered to be one of Ligeti’s major creative achievements and one of the most comprehensive sets of piano etudes written in the 20th century, they combine extremely virtuoso technical problems with expressive and musical lines, following in the footsteps of Chopin, Debussy and Scriabin, but also introducing new concepts and technical ideas.

My particular favourite from this set is the very famous etude no.14, the “Devil’s Staircase.” The idea behind this is that’s it’s a relentless, yet futile effort, expressed in music. It also alludes to the endless staircases in the art of the Dutch artist M C Escher. This etude is a driving and rhythmic toccata that moves polymetrically up and down the piano, featuring ascending chromatic scale motifs and impressions of bells ringing. I strongly advise you listen to it; you will think it’s extremely weird at first, but study it and it will grow on you.

This is another massive set, at a little over two hours when played in full. Very rarely will you hear a performance of these works played in full, because they are so extensive and so difficult. However, you can find recordings of such performances on YouTube. The level of intensity and difficulty present in these pieces is insane. The structure of the piece is a series of 20 “regards” (visions) on the infancy of Jesus, and was composed in 1944 for Messiaen’s wife Yvonne Loriod.

The set is characterised by a series of themes, or “leitmotifs” which represent certain ideas or concepts. These themes are present across the entire set, and include the “theme of God,” the “theme of Mystical Love” and the “theme of Chords.” I highly recommend reading up on this work, as it is mammoth in scope and thoroughly deserves your time and attention. My two favourites from the set; No. 10 (“Regard de l’Esprit de joie”), which is an almost aggressive contemplation on the joyful nature of the Holy Spirit, and the No.15 (“Le baiser de l'Enfant-Jésus”) translated as the “kiss of the Infant Jesus.” I’m not a religious man, but this is some extremely good music.

Some of you may be surprised to see this here. While not usually considered as particularly technically difficult, Mozart’s piano music comes as a surprise to most when they decide to play it. It’s not necessarily that it’s especially technically difficult; it’s primarily because the music is extremely exposed and any mistake or blunder is immediately obvious. In a piece like the Messiaen mentioned before, it’s extremely easy to hide mistakes with the pedal; with Mozart, you have no such opportunity.

This particular sonata, written in 1789, is Mozart’s last piano sonata. It is considerably more technically difficult than the other sonatas, consisting primarily of extended contrapuntal, polyphonic passages. The second movement is not particularly challenging but the final movement is an absolute minefield. However, I personally feel this to be Mozart’s best piano sonata, so if you feel like the other Mozart sonatas are not enough of a challenge, this would be a great one for you to get your teeth into.

Gaspard de la Nuit is an infamously difficult work. It is a set of three movements, each based on a poem from a collection of poetry written in 1836 by Aloysius Bertrand. The final movement, “Scarbo,” was written specifically to be more difficult than “Islamey” by Balakirev. Because of its complex musical structure and significant technical challenges, it is considered to be one of the most difficult pieces in the standard piano repertoire. If you want to talk about technical difficulty, this collection is about as hard as it gets.

What elevates this piece to another level of difficulty, in my opinion, are the minutely calculated and defined instructions on the score. Ravel is so precise as regards to articulation, dynamics and phrasing, that when you play this piece there is very little room to interpret beyond Ravel’s instructions. Not only do you need to play the notes, which is a huge task in itself, but you need to ensure all of Ravel’s instructions are followed precisely. This is a mammoth work, and if you can pull it off, it’s an amazing achievement.

Beethoven’s Sonata no.29 in B-flat Major, otherwise known as the “Hammerklavier,” is widely viewed as one of his most important works, and perhaps one of the most important piano sonatas ever written. Completed in 1818, it was not publicly performed until 1836 by Franz Liszt, due to its difficulty. This work was written at a time when the fortepiano was the dominant instrument, but the harpsichord, a leftover from Baroque times, was still prominent. This sonata was specifically written for the fortepiano, and is significant in this respect, as the title “hammerklavier” specifically instructs the performer not to play on a harpsichord.

This work was widely percieved as unplayable, but was seen as a huge achievement and in some respects, the peak of piano literature. What adds to the difficulty of this work is it’s length; up until this point in piano composition, pieces had not been anywhere near as long as the Hammerklavier, which runs between 45 to 60 minutes. In all my years at university, I never saw anyone even attempt this piece, and in fact it is so difficult it is often excluded from the repertoire list of international piano competitions. Try at your own risk!

Literally translated as “The Brave,” this piece gives the impression of a knight riding on horseback. Very little is known of this piece, which was written as an etude in octaves and in jumps up and down the keyboard, but it is difficult. Extremely difficult. I don’t know of any pianist who regularly programs this piece in their recitals, and the only recordings I’ve ever heard are amateur pianists on YouTube or computer-MIDI recordings. I’ve certainly never seen a studio recording, although I would very much like to hear one, so if anyone knows of a studio recording of this piece, please let me know.

I’ve included a snapshot of the score down below so you can you see how crazy some of these jumps are. I don’t know whether Alkan himself ever performed this piece publicly, but if he did, and at anywhere near the stated tempo (which is very very fast and none of the human recordings that exist come close to the composer’s intended tempo) but if he did, it would have been very interesting to watch. 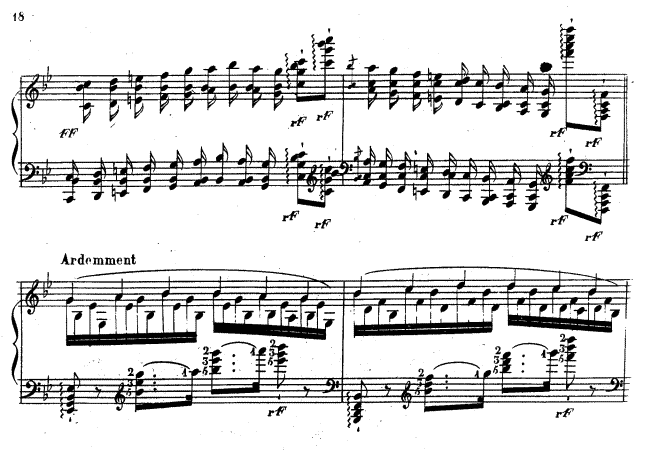 Arguably Scriabin’s most popular and most widely recorded sonata, this was described by esteemed pianist Sviatoslav Richter as the most difficult piece in the entire piano repertoire. Composed in Lausanne in 1907, this work is composed in one movement, a new idea for Scriabin at the time but a format he continued when writing subsequent piano sonatas. This piece broke new ground for Scriabin as regards to the harmonic language and tonal structure of the piece. While this piece is arguably in F-sharp major, due to the initial key signature, there is no tonal centre to this work and could very easily be said to be atonal.

The difficulties of this piece are far too numerous to mention. On first listen, this piece can sound like there’s a lot going on but no real structure, so it takes time to digest the compositional method, and that’s before you get to the technical difficulties, which involve balancing numerous sounds and textures at once, coupled with some very challenging, dense chordal passages and complex polyrhythms.

I know some of you will disagree, and that's great. Let me know some of the pieces that you'd prefer to see in this list, or pieces you found particularly difficult.

If you're interested in learning some of this music, and want to read a little more about how to practice difficult music like this, check out the following articles I've written about piano practice:

How to use a metronome for piano practice

How to practice piano efficiently and effectively

3 thoughts on “The 7 Most Difficult Piano Pieces Ever”