Most pianists are generally aware of what the two most common pedals on a piano do; the left pedal makes the sound softer, and the right pedal sustains the sound, making it longer. But many pianists are very confused by the middle pedal. Many simply don’t know how to use it, what it does or even what benefit it might provide to your music-making. So, what does the middle pedal on a piano do?

Interestingly there is no one answer to this question. The middle pedal might, depending on which type of piano you have, do any one of four different things. This can be confusing, but is actually fairly straightforward; usually, the type of piano that you own roughly determines what the middle pedal does.

As a piano student or budding pianist, I’m guessing that you’re most likely to have an upright piano at home. Not all upright pianos have three pedals, but most high-end uprights such as the Yamaha U1 or Kawai K3 will have them. On these pianos, the middle pedal generally serves as a practice pedal, sometimes called a “mute” or “celeste.” 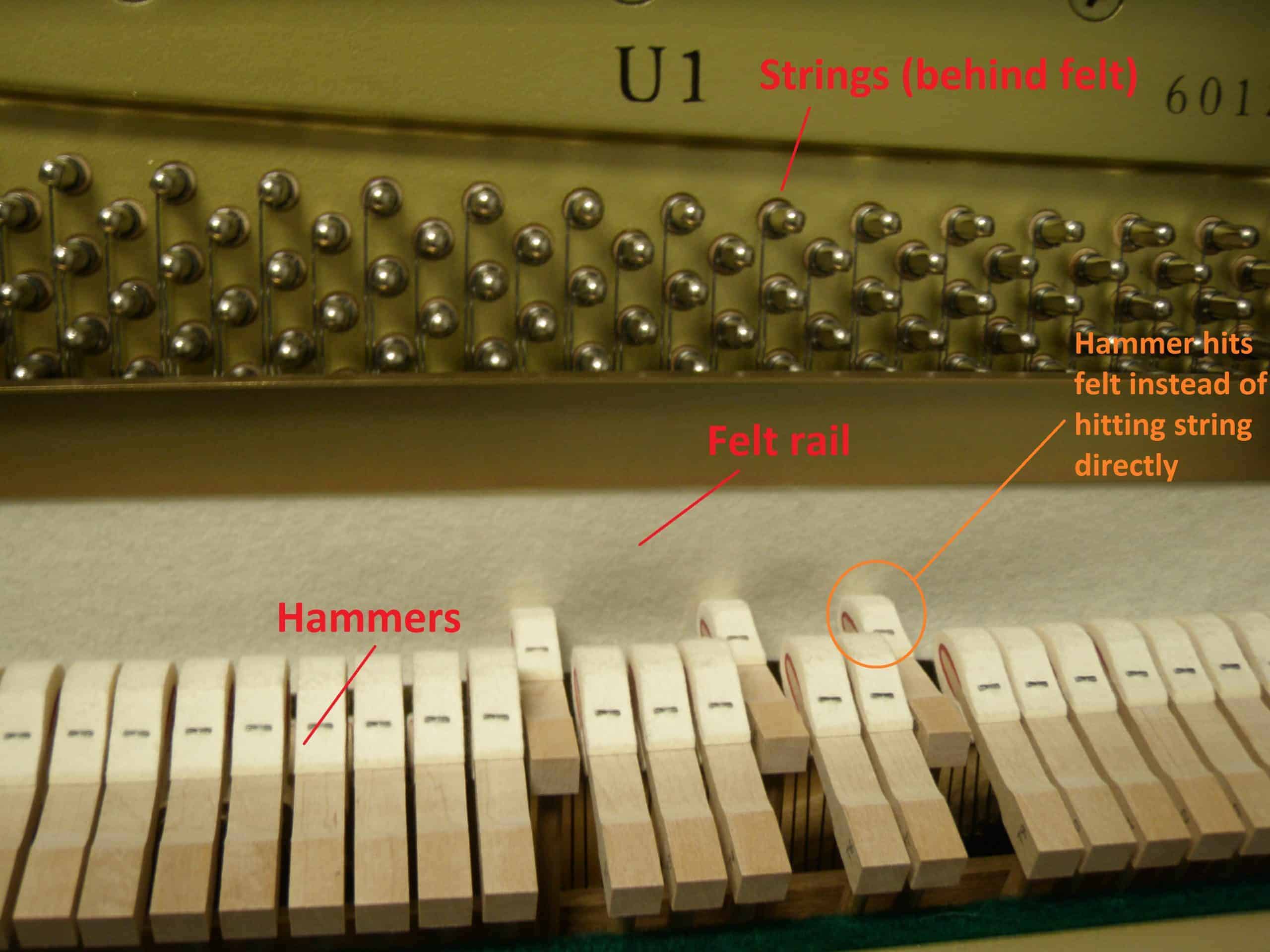 What this does, as per the diagram above, is lowers a piece of felt between the hammers and the strings. That’s it; it’s got nothing to do with either of the other two pedals, and nothing to do with sustain, as we’ll come onto later. It simply serves as a way to make the piano quieter. This can be a very useful feature if you live in an apartment, or want to practice late at night without bothering other members of your household.

This is the reason that you generally find this on upright pianos only; they are designed as practice instruments. I’ve yet to find a grand piano with this functionality. Usually you will be able to lock this pedal in place, usually by depressing it as far as it will go and then sliding it to the left or right. This means that you don’t have to continually press the pedal to keep the piano muted. Pretty useful if you need your practice to be a little quieter.

Generally found on: Low-end grand pianos such as the Yamaha GB1, some upright pianos

This is one of the less common use cases for the middle pedal, and one that I think is a little bit of a waste of time. Fortunately you don’t see this very often, and when you do, it’s usually on lower-quality grand pianos. I’ve never seen it myself on an upright, but I’ve been told that some uprights have them.

A bass sustain pedal will only sustain the bass notes of your piano. It basically offers a kind of split sustain, whereby if you depress this pedal, only certain bass notes are sustained. There will be a cutoff in the middle of the keyboard, so if you use the pedal, notes to the left of this cutoff are sustained, and notes to the right are not. This means you can sustain the bass, while also playing staccato in the treble. 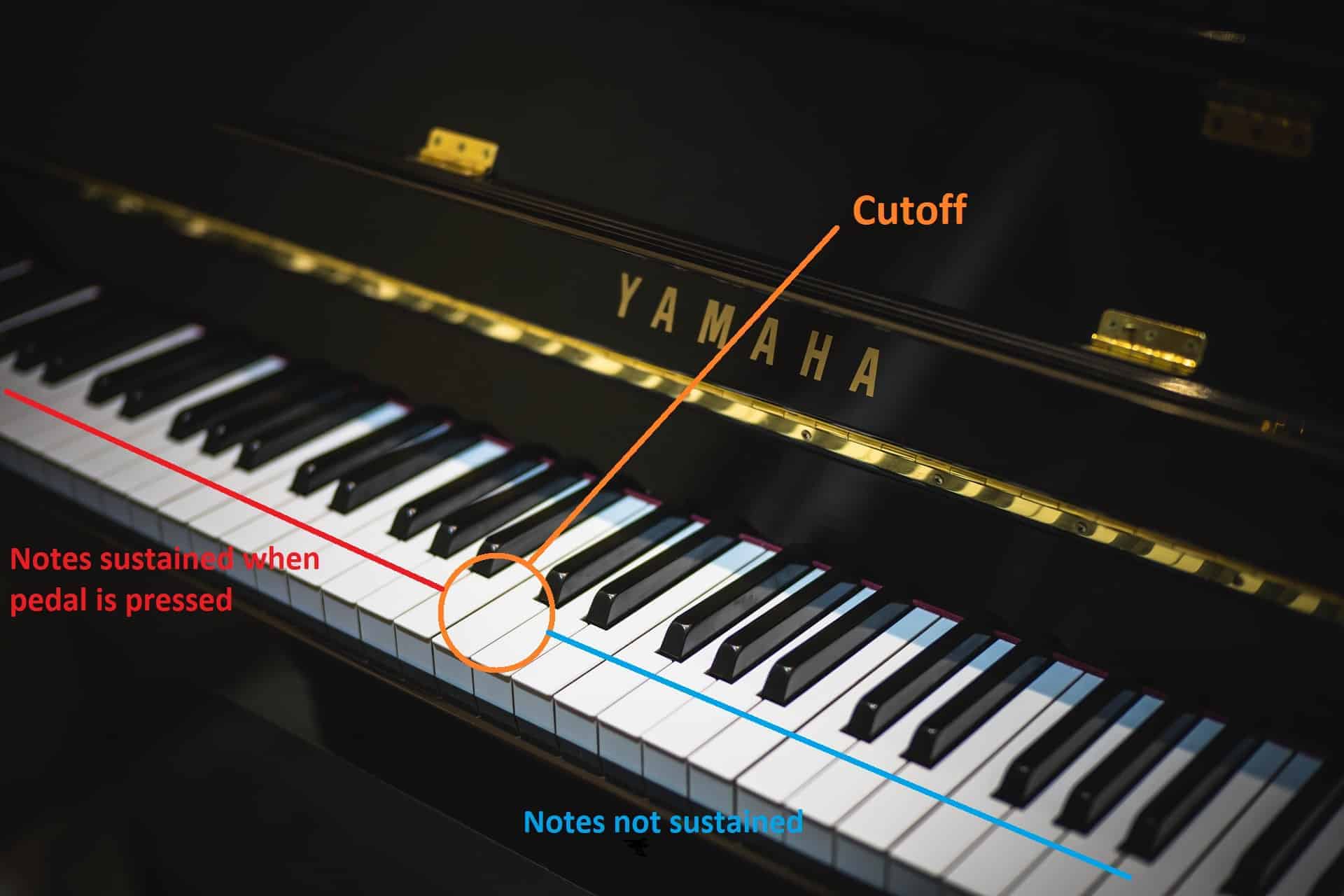 In theory this is quite useful, and could lead to some musically interesting effects , but I am struggling to think of an area in any piece where you would actually need to use this functionality. It certainly won’t be a game changer for you to buy a piano with this feature, and in my opinion is a watered down version of the sostenuto pedal functionality, which we’ll get to later.

Generally found on: Upright or grand pianos with a silent system fitted

This version of the middle pedal is quite rare, and you will likely know if your pedal does this, as you will have bought a piano with a silent system. A silent system is a very useful invention that essentially turns your acoustic piano into a digital piano. A computer is fitted to your piano with a headphone jack, and electronics are placed under the keys to communicate with the computer. This allows you to play your acoustic piano as a digital piano, without bothering your neighbours.

The silent pedal will serve two purposes; firstly, it will drop a bar between the hammers and the strings to prevent the hammers striking the strings when a key is pressed. This is how the piano becomes “silent.” It will also switch on the computer, enabling you to put your headphones in and play privately. 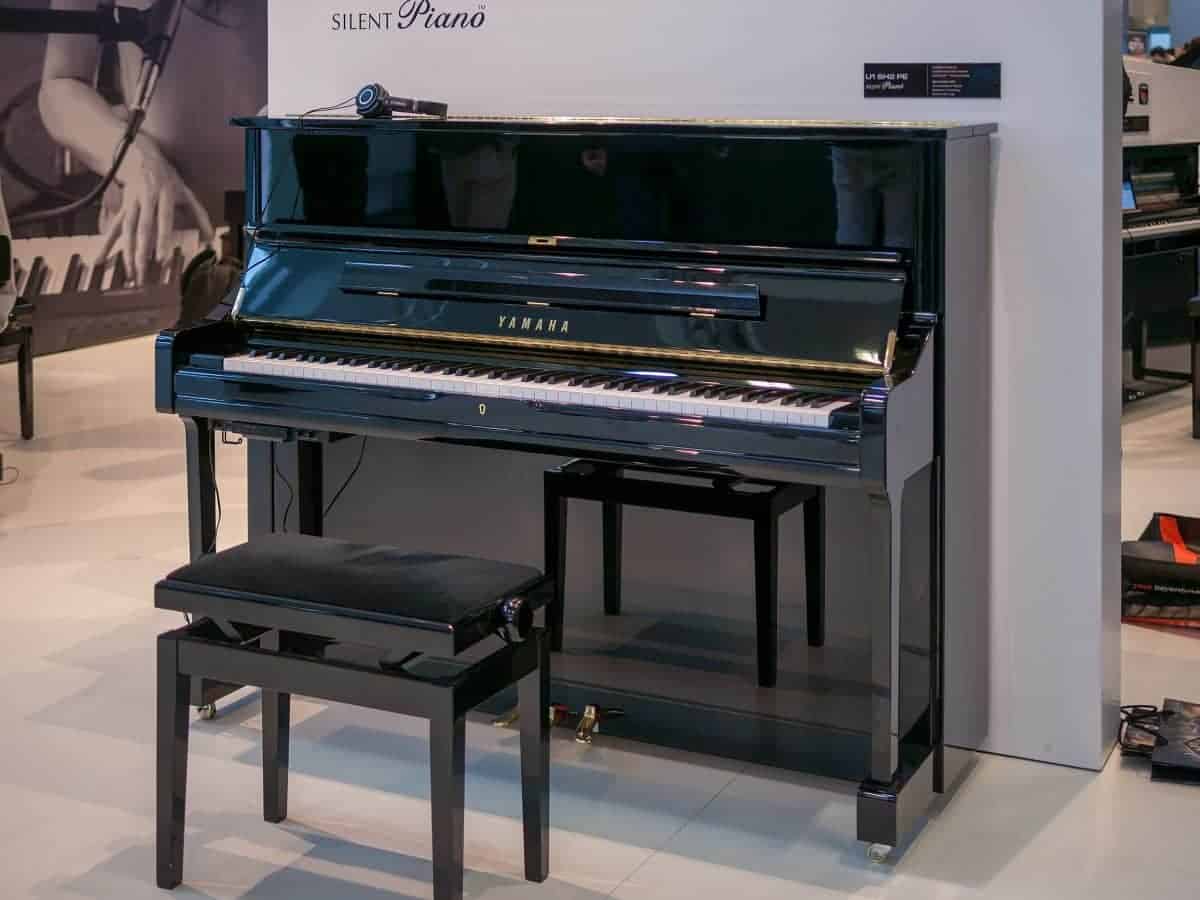 For night-time playing, or when you just want to play privately, these pianos are an excellent choice. Just bear in mind that they are not completely “silent” so to speak; you will still hear the hammers knocking slightly against the rail that has been placed between the hammers and the strings. There will be no music audible until you put your headphones in, though.

And now, the most common use case for the middle pedal:

Generally found on: Most grand pianos, all digital pianos with a middle pedal

The vast majority of grand pianos and all digital pianos will include this functionality, especially higher-end pianos such as Steinway and Bosendorfer. This is the most common use case for a middle pedal, and is certainly the only one that composers have written for. It’s not seen very often in written music, but there are some examples of it. What the sostenuto pedal does is almost like a selective sustain function. If you press a key, and then press the sostenuto pedal, and let go of the key, that note will be sustained, but all other notes will be unsustained.

The key you pressed remains sustained until you release the pedal. You can strike it again and it will be sustained again, without having to release and depress the pedal again. This is useful in certain music where you might need to have a bass chord sustained, for example, but with staccato figurations in the treble. This sounds very similar to the bass sustain pedal we spoke about earlier, but this is a slightly more refined version; this allows you total control over what notes are sustained and which ones aren’t. 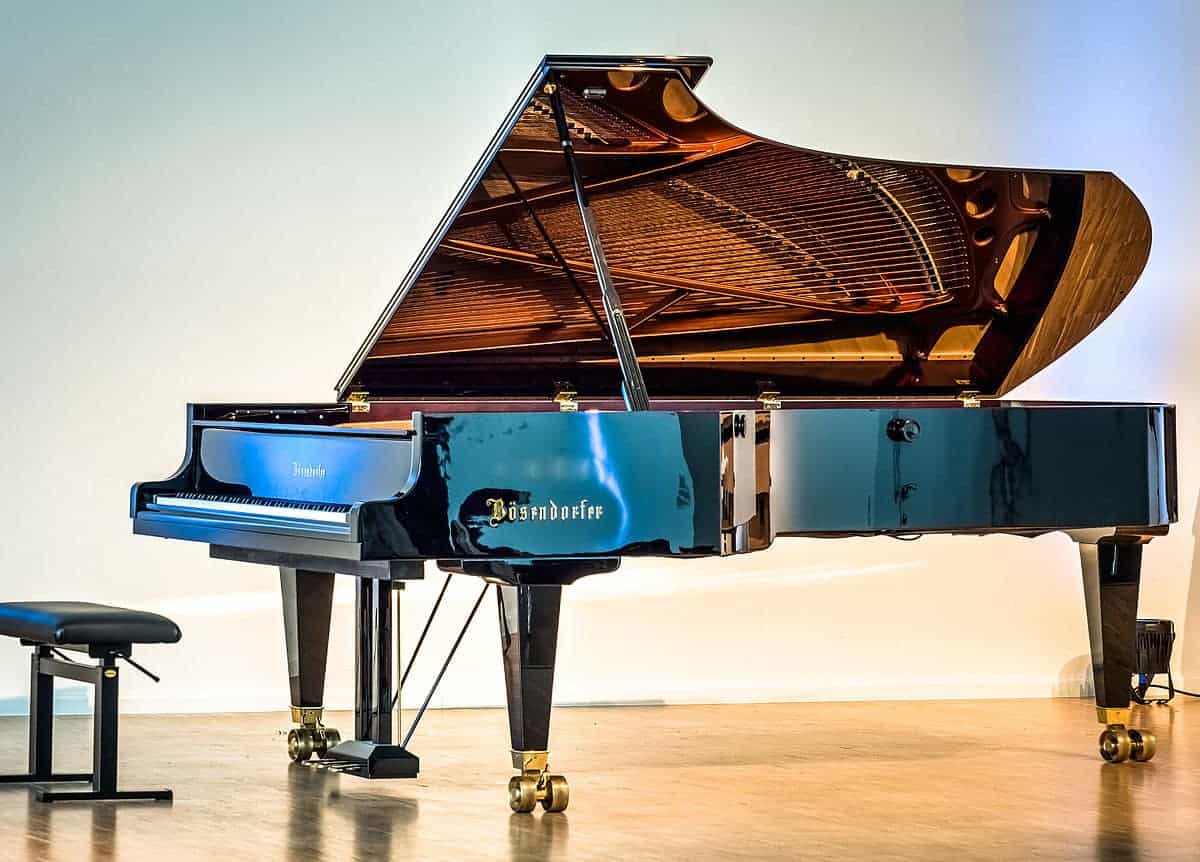 Unless you have a grand piano at home, you’re most likely to experience this on a digital piano. All digital pianos that I’ve tried that have a middle pedal have this functionality. This is because when you think about it, none of the other uses make sense; there’s no need for a practice pedal because you can turn a digital piano’s volume down, there’s no need for a silent function because all you need to do to silence your piano is plug some headphones in, and there’s very little point implementing a bass sustain functionality when the manufacturer could just implement a sostenuto pedal without any extra effort.

What Does the Left Pedal on the Piano Do?

On an upright piano, the leftmost pedal will move the hammers slightly closer to the strings. As a result they have less distance to travel before they hit the string and the sound is slightly softer. The piano produces the same tone, just at a slightly lower volume. Because the hammers have moved closer, you will also notice that the piano’s action becomes much lighter and easier to play.

On a grand piano, the leftmost pedal actually changes the angle at which the hammers hit the strings, to the point where one string is not struck. Because fewer strings are struck, the sound is quieter, as on an upright piano, but additionally because now a slightly different part of the hammer is hitting the strings, the sound has a different quality; the tone of the piano becomes much softer and more subdued, more muffled.

Digital pianos take after grand pianos in this respect; the tone and texture of the sound changes as well as the volume.

What Does the Right Pedal on the Piano Do?

The right pedal, thankfully, functions the same on all types of piano; digital, upright and grand. The right pedal, also called the “sustain” or “damper” pedal, prolongs the sound without having to keep the keys pressed. This allows you to “sustain” harmonies or notes while also playing other notes.

Each note on the piano has a “damper” associated with it. This damper keeps the string muted. When you press a key, the hammer strikes the string just as the damper is lifted, so you hear a sound. Releasing a key causes the damper to fall back onto the string, cutting the sound off. This is what enables you to play staccato. Otherwise, the sound would keep on ringing until the string stopped vibrating.

The right pedal releases all the dampers on all the notes. This means that the strings will be allowed to vibrate freely as long as the pedal is depressed. When the pedal is released, the dampers fall back onto the strings, and the sound is cut off.

In the meantime, happy practising!

1 thought on “What Does the Middle Pedal on a Piano Do?”